In 1930, Charles Fillmore published The Twelve Powers of Man, which is still used by Unity groups as a structure of spiritual learning. After concluding that the bible and all other canonical scriptures should be read and interpreted metaphysically, not literally, he published the Metaphysical Bible Dictionary (1931). On October 6, 1931, beloved founder Myrtle Fillmore made her transition at the age of 86 years. Charles Fillmore remarried in 1933 to Cora G. Dedrick, with whom he worked closely on his later writings. 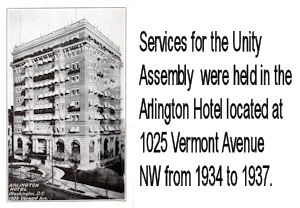 Judge Dean Franklin continued his ministry until 1937.  Mary McClellan (known for her Healing Ministry) became the senior minister and remained with the Society until 1940. Although the church was no longer an official Unity Center, it maintained the name Unity Society of Washington, D.C.

In 1934, The Unity Assembly was established in Washington, DC as a recognized Unity Center. The ministry was led by Margaret and E. Roy Feldt, who opened a center called The Unity Assembly. Before arriving in Washington, Margaret Ann Nichols had been the leader of a Unity Center in Erie, Pennsylvania since 1925. It was there that she met and married a businessman, Ervin Roy Feldt. Roy followed Margaret Ann in her work and received training as a Unity Minister.

Although there are no public records from The Unity Assembly; its history has been communicated verbally.  At its inception, there was no formal membership. Truth students who had dropped out of the Unity Society formed the nucleus of the new congregation. Services were held in the Arlington Hotel located at 1025 Vermont Avenue NW. The Leaders made all arrangements and handled the finances.  In a very rare occasion, Charles and Cora Fillmore spoke at the Unity Assembly in 1934. This was the only documented occasion that they appeared in Washington. 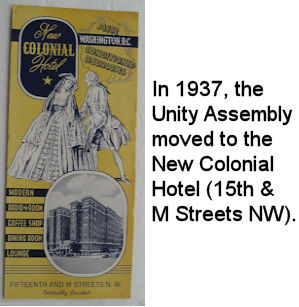 Within three years, the Unity Assembly was moved to the New Colonial Hotel at 15th and M Streets, N.W., where it remained until 1955. There, Sunday morning services were conducted in a parlor on the main floor and classes in a room on one of the upper floors. Very popular at the time were classes in “Higher Mysticism.”  There was also a Sunday School, and it was here that Ann Sandefer, future Unity leader, did her first Truth teaching.

The Local and National Landscape

The nation’s capital boasted beautiful Federal buildings, gorgeous Victorian mansions, and large sections of substandard housing where the poor lived without running water in alleyways. (Now high-end restaurants, such as the Dabney and Mayden fill these same alleyways.) Washington’s poverty was greatly increased by the Great Depression, which began on October 29, 1929 with the stock market crash. Across the country, banks foreclosed on millions of homes, businesses, and farms. Thousands of banks closed, taking their customers’ savings with them. Nearly a third of American workers lost their jobs. In Washington, formerly prosperous people lived on the streets and begged for food.

In 1932, 43,000 desperate World War I veterans and their families came to Washington to demand the redemption of their bonuses for service which could not be redeemed until 1948. President Herbert Hoover called in the military to clear the camp, burn the tents, and drive the protesters away. Two of them were killed and many injured.

Even as the U.S. gradually pulled itself out of economic stagnation, Germany descended into fascism and tyranny with the rise of Adolf Hitler and the Nazi Party. Though viewing him with alarm, many Americans wanted to avoid another European war at all costs. Only a few years earlier, the U.S. had lost 116,000 men, with 204,000 wounded, in World War I, another conflict among European powers who couldn’t seem to solve their problems without U.S. intervention.